I wish I could tell you that corned beef and cabbage is a family tradition, but truth be told I’d never actually had it until Friday. I’m pretty sure my grandma makes it every year, but somehow I’ve managed to avoid that dinner because honestly, could anything sound less appetizing? Technically, I’ve still never had corned beef (and never will), since I don’t eat red meat, but I did try the cabbage and it was delicious. I asked my dinner guests to give me their honest opinion on the corned beef potatoes, since I had to write about them as honestly as possible without firsthand knowledge, and they promised they were delicious and blog worthy, so here you go. 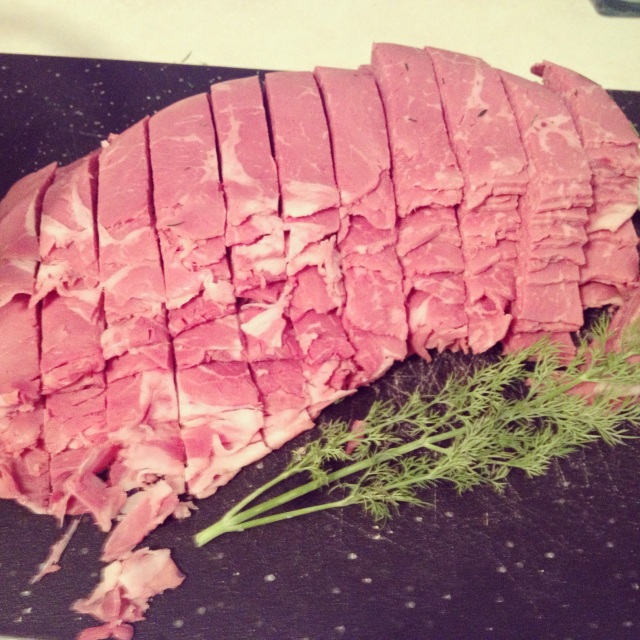 I’m really going to branch out and start writing about recipes from something other than my favorite cookbook soon, but I think this one is timely enough that it warrants being my fourth Melissa Clark recipe in as many weeks. I had mentioned to a couple friends awhile ago that I wanted to get through the entire “March” chapter, but that I was stuck on corned beef and cabbage – it sounds like my worst nightmare, so why would I ever make it. But when they both told me they loved corned beef and would be happy to be my taste testers, we decided to throw a little St. Patrick’s Day get together. The two best things about this recipe, in my opinion: (1) the corned beef it calls for is deli meat, so I didn’t have to cook it, and (2) it’s easy to make a vegetarian version if you, like me, like to cook meals your friends can enjoy even if they’re things you can’t eat. If you can’t find deli corned beef, though (I couldn’t find it at Safeway or Met Market, but luckily my co-hostess found it at QFC), you could do a corned beef brisket in the crock pot, or use any other deli meat or leftover roast-type meat. And although the vegetarian version is just a stuffed potato with butter and dill, I thought it was delicious and still very Irish. 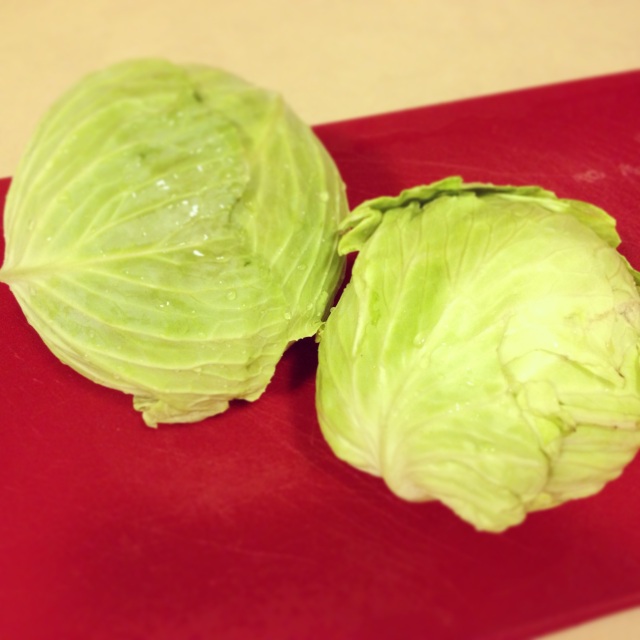 A note for people unfamiliar with the traditional corned beef and cabbage recipe: from what I could garner from my limited research, it seems the corned beef and cabbage are usually cooked together, in a crock pot or dutch oven or something along those lines. I saw a Paula Deen recipe where she sautéed the cabbage in bacon grease and then added corned beef from a can, like spam. Excuse me while I vomit. I like this recipe because it’s essentially a doctored-up twice baked potato (yum) – I baked the potatoes the night before, but then was able to get everything else together in the hour between leaving work and my guests arriving. And you roast the cabbage as you would any other vegetable (the recipe just calls for oil and salt – I used black pepper as well, and was planning to add a little parmesan before I got distracted and forgot).

So, if you’re looking for an excuse to throw an easy St. Patrick’s Day party, just ask your friends to bring their drink of choice, and perhaps an app or a dessert (my friend Liza made the most delicious “Irish Car Bomb” cupcakes, and my friend Anna invented a fabulous green cocktail, recipe available upon request) and you could easily whip up corned beef and cabbage for ten in an hour. Also noteworthy: I think I spent less than $40 on all of the ingredients (to feed ten people!!) – the Irish might not be known for their cuisine, but I do appreciate their frugality. 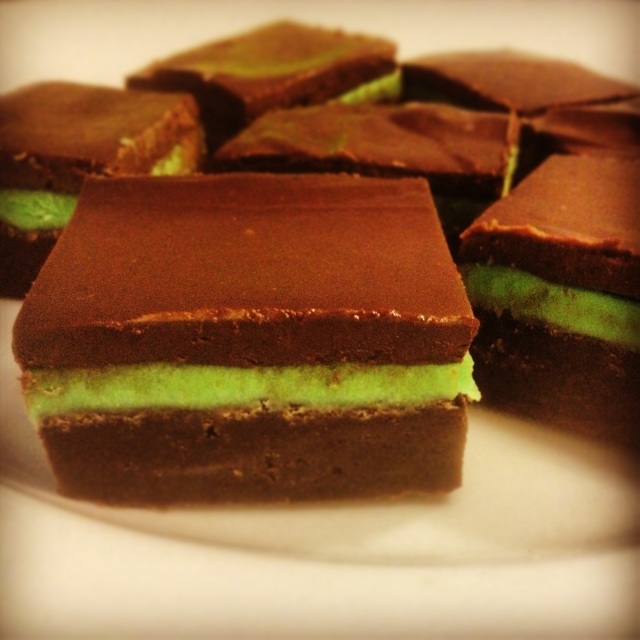 And although our meal was delicious, it’s not all that visually appealing…..so I thought I would make some festive green brownies too. I’ve been waiting for an excuse to make these ever since I stumbled upon them when looking for Christmas cookie ideas back in December, and obviously St. Patrick’s Day is the best excuse possible. I hope this inspires some of you to throw a St. Patty’s day party of your own – or at least treat yourself to a Guinness or a fun green cocktail sometime between now and the 17th! If you have any St. Patty’s recipes or traditions of your own, I would love to hear them in the comments!

from Melissa Clark’s Cook This Now

1. Preheat oven to 425 degrees F. Rub each potato with 1/2 teaspoon salt and pierce twice with a fork. Place the potatoes on a baking sheet and bake until the skin is crispy and the insides are tender when pierced with a fork, 1 hour to 70 minutes (possibly longer if you’re cooking more potatoes).

2. When the potatoes have cooled enough to handle, use a sharp knife to slice off the tops. Scoop out the insides, leaving about 1/4 inch attached to the skin, and transfer to a bowl. Add the corned beef, butter, dill, remaining salt, and pepper to the bowl and mash well with a fork.

3. Stuff the potato skins with the potato mixture.  Divide the topping among the potatoes and sprinkle with the cheese.  Return the potatoes to the oven and bake until heated through, about 10 minutes.  Run under the broiler for an additional 1-2 minutes, until golden brown and the cheese has melted.

from Melissa Clark’s Cook This Now

Preheat the oven to 400 degrees F. Cut the cabbage into 1-inch-thick slices. Brush the slices with olive or peanut oil and place on a rimmed baking sheet.  Try to keep the pieces from falling apart (though if they do start to separate, that is okay).  Sprinkle the cabbage with a generous seasoning of salt.  Roast, turning once, until crispy and browned, 25 to 30 minutes.