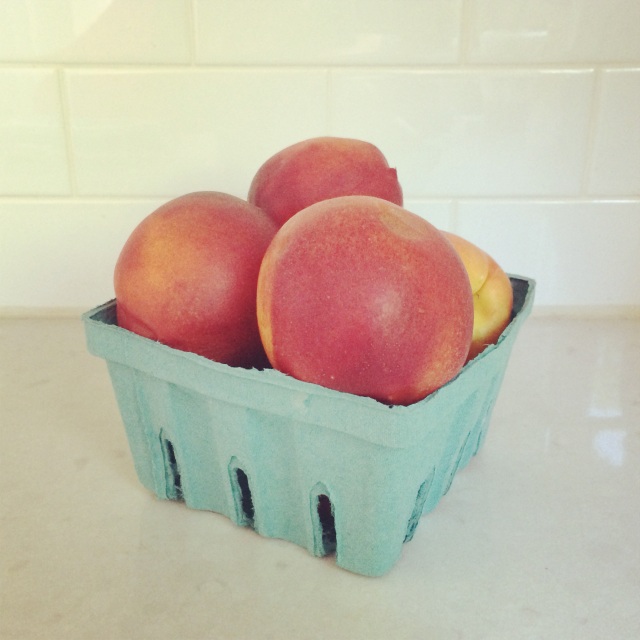 I have a “secret” pinterest board called “B&B – to make.” You know the secret pinterest boards, the ones you’re supposed to use to “pin” things for your wedding, or a party you’re planning, where you want to organize all your ideas but you don’t want other people to see, lest you ruin the surprise? Well, I have one for my blog, where I pin recipes I want to make at some point in the future (normal, right?). The problem is, I rarely check my board to see all of the things I’ve pinned, so it’s kind of a wasted effort (much like most of what I do on pinterest, incidentally).

However, two things happened the other day, completely independent of each other. One, I had all these nectarines ripening on the counter, faster than I could eat them, and had been wracking my brain to come up with a way to use them. Two, I was searching for inspiration for a summer dessert (not related to nectarines) and for whatever reason thought to check my pinterest board. And, what do you suppose I found? A recipe for a nectarine cobbler, from none other than my very favorite, Melissa Clark. Kismet! 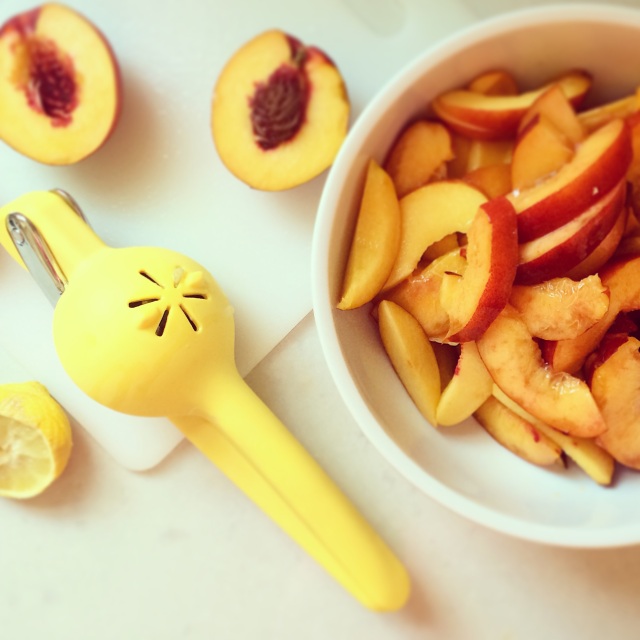 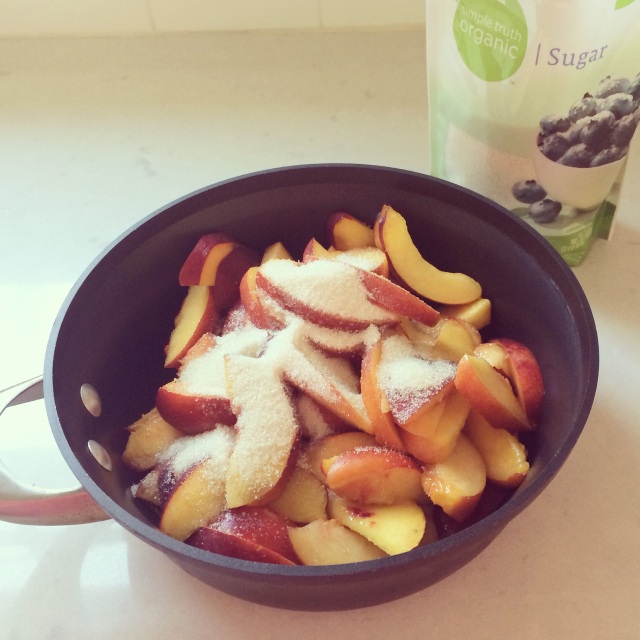 Nectarines are a bit of an underrated fruit, I feel like – why is that? When I see peaches I see pies, crisps, cobblers, shortcakes, dumplings, ice cream – you name it. When I see nectarines all I ever think to do is eat them. Which isn’t the worst thing in the world, as they’re delicious just sliced up and served plain. But baked into a cobbler, they’re as good as any peach dessert you could dream up. And you don’t even have to peel them!

This “cobbler/cake” is essentially made up of four (very simple) layers – browned butter, buttermilk batter, nectarines, and an effortless topping.  I didn’t read Melissa’s article about the “cobbler/cake” until after I had already made it (she usually includes an article along with each recipe she posts in her column, where she writes about her creations much more eloquently than I ever could) – had I read it sooner, I would have made this in my cast iron skillet (and it would have been adorable).  As it were, I planned to make it in an 8×8 baking dish as the recipe instructs, but couldn’t find my good 8×8 pan so thought I’d get creative with some ramekins instead. 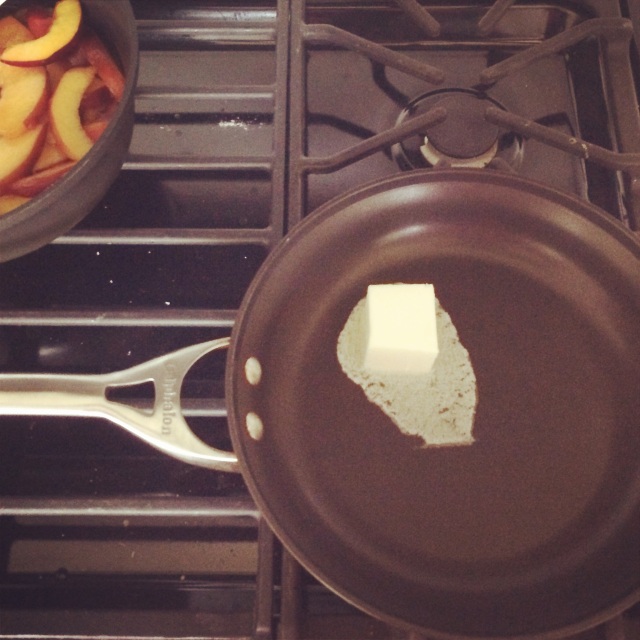 To start, brown the butter (tips, if you need them).  Whisk the dry ingredients and buttermilk into a batter and pour it on top of the brown butter.  If you were using a skillet, you could melt the butter and then pour the batter right on top and use it as your baking dish (that many fewer dishes to wash!).  In my case, I divided the butter into four ramekins and then dolloped the batter on top. The cooked fruit and syrup go on top, and the cobbler is finished with a crumble topping of sliced almonds, nutmeg, and demerara sugar.

Melissa doesn’t tell you to toast your almonds beforehand, but I’ve had bad luck in the past with almonds never toasting quite enough when they start out raw, so I toasted them in a skillet over low heat for a few minutes beforehand.

Seriously, have you ever seen anything cuter? They were almost too pretty to eat.  Only almost though, as of course we still managed to inhale them. (You might note that the recipe says it feeds 6-8, but I only had four ramekins so I decided each ramekin was for two people – and if anyone ate a whole one by themselves I’m not telling.)

Everyone that tried it asked me for the recipe, which I always take as a good sign.  Melissa never disappoints – I think this will be my go-to dessert recipe for summer 2014. You could definitely do it with peaches too (although I’ll be saving my peaches for the aforementioned dumplings), or any stone fruit. The nectarines will be hard to beat, though – underrated fruit no longer. Thanks, pinterest! 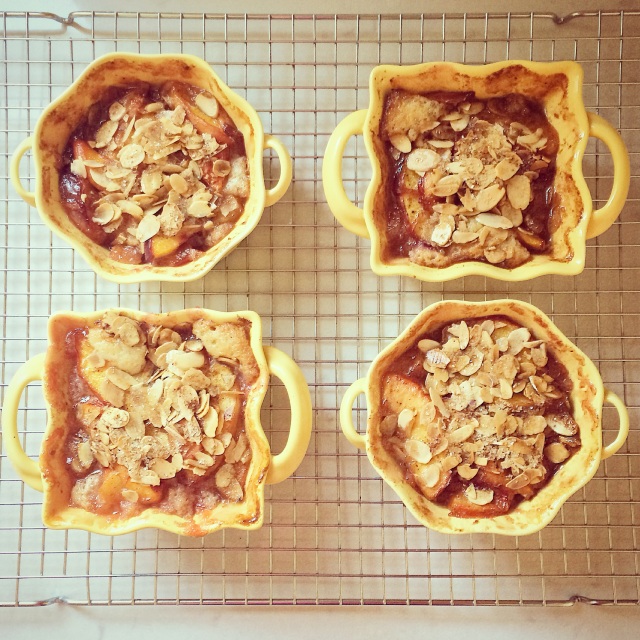 1. Heat the oven to 350 degrees F.  In a saucepan over medium heat, combine the fruit slices, lemon juice, and 1/4 cup sugar. Stirring constantly, bring the mixture to a simmer, then take the pan off the heat.

2. In a small saucepan over medium heat, melt the butter and cook, swirling the pan occasionally, until it smells very nutty, turns golden, and flecks of dark brown appear, 2-3 minutes. Pour the brown butter into an 8-by-8-inch baking dish (or divide into ramekins, 4 large or 6-8 small).

3. In a mixing bowl, combine the flour, remaining 1/2 cup sugar, baking powder, and salt.  Pour the buttermilk into the dry ingredients and mix just until the dry ingredients are moistened. Scrape the batter on top of the brown butter – use a spatula to even out the batter but be careful not to mix it into the butter.  Scatter the nectarine slices and juice on top of the batter without stirring.  Sprinkle with almonds, nutmeg, and demerara sugar.  Bake until golden brown, 50-55 minutes (45 for ramekins). Transfer the pan to a wire rack to cool.  Serve warm, ideally with ice cream.