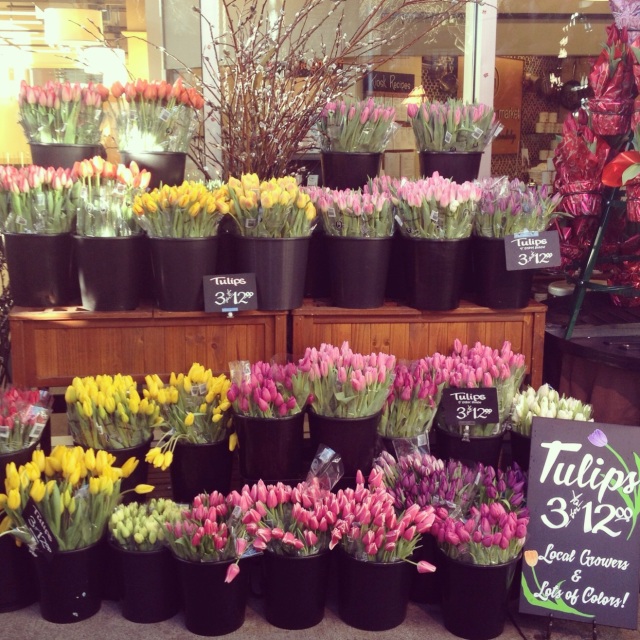 Tulips at the market

Happy Friday, friends! All of the tulips, daffodils, and crocuses popping up in the markets and yards make me feel like spring is finally here! Just last week I was scraping ice off my car, yet next week’s forecast is in the 70s.  Such a crazy time of year!  Some fun inspiration in honor of the season of renewal:

And then, some not-necessarily-springy highlights from my (last few) week(s). Have a wonderful weekend!

Delicious meal at Grassa in Portland (don’t worry, this was just the first course).

Bundt cakes (lemon poppyseed and rum) for my dear friends’ wedding last weekend – in lieu of having a traditional wedding cake, the bride asked about twenty of her girlfriends to make their favorite bundt cakes. Tragically,  my cakes and I ended up missing the wedding due to a terribly-timed bout with the norovirus, but all reports said the bundt cake table was a hit!

Champagne cocktails at Tallulah’s in Capitol Hill – so hip.

My new baby nephew’s first stationary from my new Etsy fave.  I’m going to try really hard not to overwhelm this blog with pics of all the baby things I can’t seem to stop buying, but I thought these were extra cute! And what unborn baby doesn’t need personalized thank you notes? 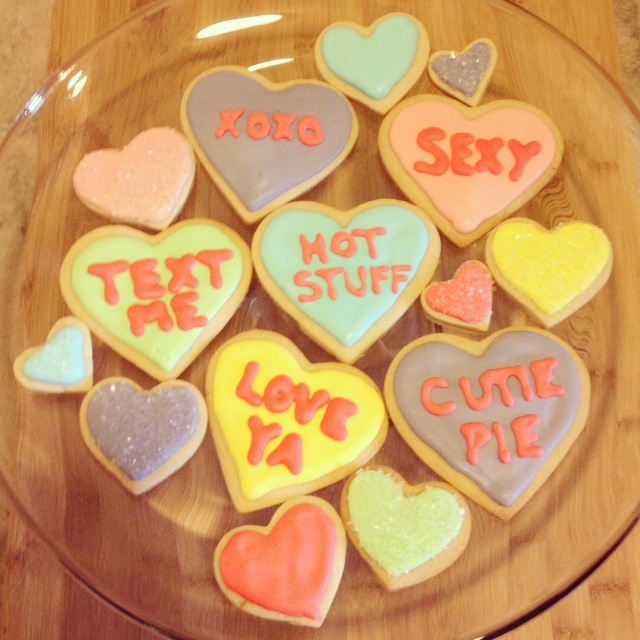 Happy Valentine’s Day, friends!  And happy first birthday to Blueberries and Basil, which celebrated the conclusion of it’s inaugural year this past week (remember my first post?)  Valentine’s Day is the best holiday for cookie decorating, I think – although I might think that about every holiday. I made these conversation hearts pre-blog two years ago (inspired by Cupcakes and Cashmere), and although my decorating skills have improved since then, I still have a long way to go. It just takes so much patience! I also really love the tiny pastel hearts and the cupcakes, inspired by this amazing cookie blog (which I discovered thanks to my friend Kristen). 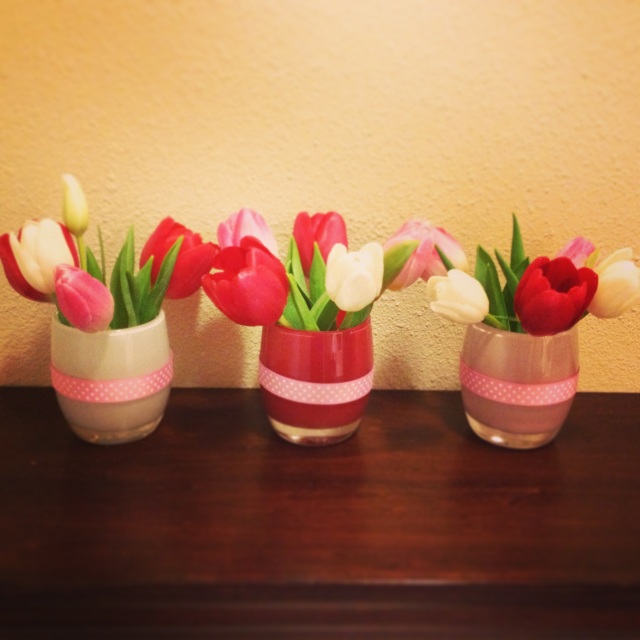 My favorite way to decorate for a holiday! Remembrance, Joy, and Baby with mixed tulips and ribbon accents (more Valentine’s colors here). 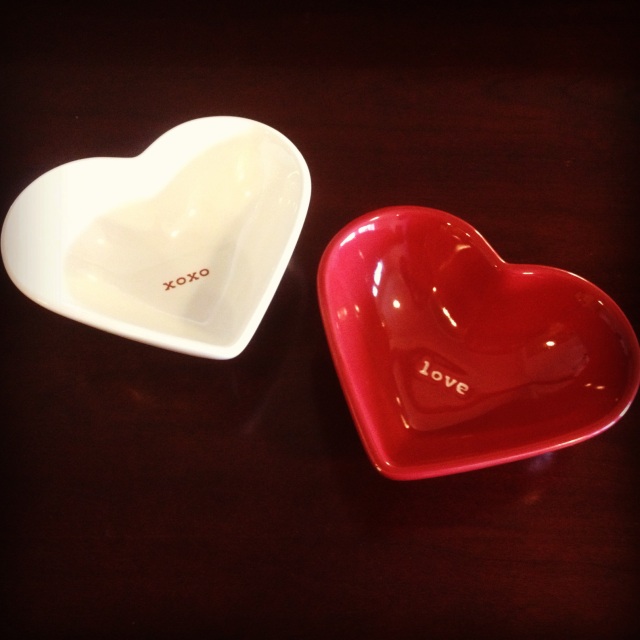 My godmother, a fellow Valentine’s Day lover, gave me these little bowls a few years ago – I love digging them out each year and filling them with my favorite Valentine’s candy. Similar here and here.  (Let’s not talk about how many candy hearts I’ve eaten in the past week.)

I bought this little outfit for my first niece/nephew, who is due at the end of July. I’m trying not to shop too much before we know if it’s a boy or a girl, but this little gender neutral outfit was too cute to pass up (the hat says “HUGS” on the back!!). The hat is sold out online, but you can find the little onesie here (a more girly version here, more boyish here, all on sale!) – it’s probably too late for this year, but in case anyone else is planning ahead!

My mom and I discovered this line of Parisian specialty teas at the Plaza Hotel when we were in NYC this past December. She loves the original Detox tea, but I’m obsessed with the “BB” version, which is a lighter, grapefruit-y version of the Detox and has added benefits for your skin. Like a tea version of a BB cream, get it? And so delicious. 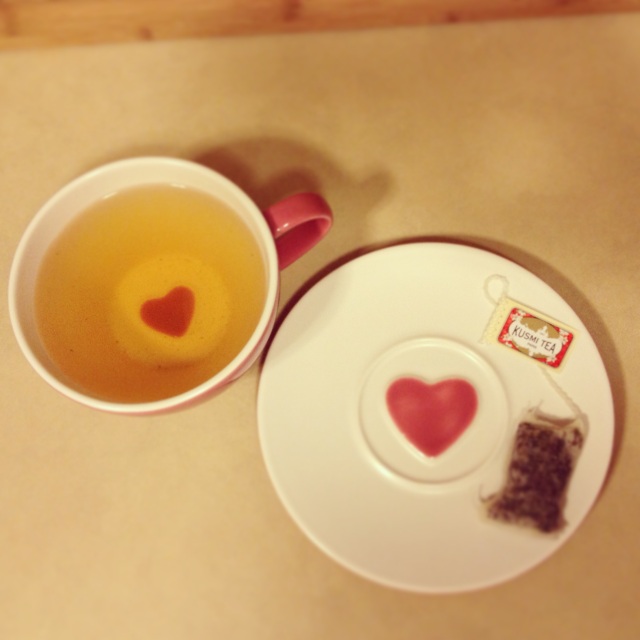 Wishing everyone a wonderful weekend and a festive Valentine’s day. Thanks for a year of loyal readership! It’s been such a fun year of blogging – and a great way for me to share some of my favorite recipes and document my weeks. If anyone has any suggestions of what they’d like to see more of, I’d love to hear them in the comments. XOXO!

Happy Friday and Happy March! Is anyone sad to say goodbye to February? I know I’m not. I tried to escape the February blahs by spending a few days in Arizona with my family last weekend, so the majority of my highlights from the week (besides Indiana’s loss on Tuesday night!!) are from our mini-vaycay. Our trip was short and sweet, and even though the temperatures were only in the mid-60s (10 degrees lower than average for the end of February), it still felt so heavenly to see blue skies and sunshine. And since it wasn’t really warm enough to lay by the pool (at least, not without a sweatshirt on), we had the chance to do things we wouldn’t normally have done had we been busy working on our tans.

Per my friend Kristy’s recommendation, hiking Camelback Mountain was on our list of things to do. There are two trails that go up Camelback, but the more difficult of the two was closed for renovations so our only option was the “longer, but less steep” Cholla Trail. All I can say is, I would recommend no one ever try the steeper route, unless you have a death wish. Or unless the renovations include some pretty serious guardrails. Because whoa, that mountain is a lot steeper than it looks. We had to abandon our water bottles about two thirds of the way up, because we needed both hands for climbing. I think at that point we decided we weren’t so much “hiking” as we were “rock climbing” (the website calls it “rock scrambling,” which sounds even worse). Despite being completely terrified, however, it was so much fun and I’m so glad we did it – but when I met some friends for dinner that night and they told me people die “all the time” when hiking Camelback, I wasn’t at all surprised.

I think spring training is going to be a new annual tradition of mine. I get so excited for baseball season to start each spring, even though lately the Mariners have been so bad that our season is beyond hope by the time it’s actually warm enough to go to a game. But spring training games are warm (or warm-ish) even in February, and tickets are $7. You can essentially sit wherever you want, and even the beers are cheaper. And parking is free if you show up after the first inning, like we did. Peoria Diamond Club, here I come! (PS – at the time of this posting, M’s are 6-1! Maybe this will be our year, after all!). 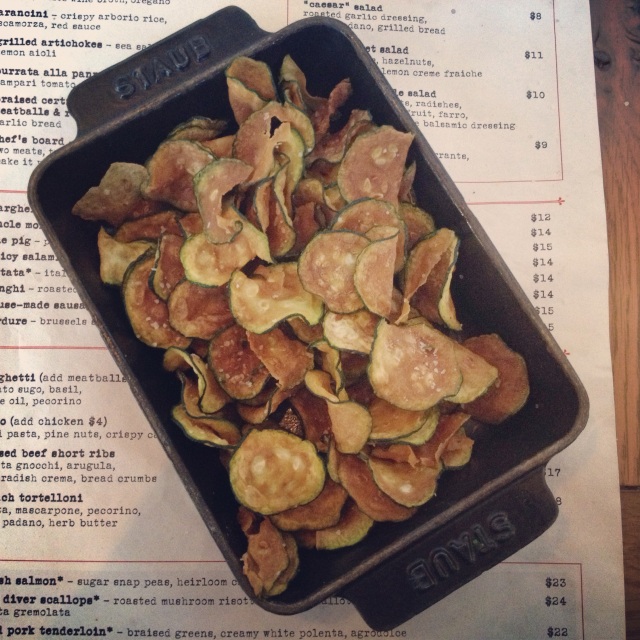 Another bonus of our trip was that every single meal was delicious. We had some recommendations thanks to my sister’s friend Shannon, a Scottsdale native, and all of them were great. North has all-day happy hour on Sunday, so we headed there after the M’s game for an early dinner and half-priced wine. Two of our app orders, brussels sprouts and “zucca chips,” arrived in these mini cast iron casserole dishes that I’ve been obsessed with for quite some time – now I want them even more. And/or these, and/or these. And then I’m going to throw a party and serve zucca chips in them, because they are adorable and delicious. I can’t wait.

I know I already talked about enamel bracelets last week, but oops! I bought another one. I love anything with a “C” on it (Anthropologie is a very dangerous place for me) so when I saw these on the C. Wonder website I decided to splurge. I’m going to buy a couple more for gifts, and I probably need the “E” for my middle initial too, since orange and pink are so fun together! Or rather, now that I know my dad is reading this, I’m not going to buy anything else, and save all my money for retirement.

I know technically spring doesn’t start for three more weeks, but I’ve always felt like the seasons should be cleanly broken into months. Spring starts in March, summer starts in June, etc. It just makes so much more sense that way! It’s still dumping rain here in Seattle, but all the tulips at the market make it feel like spring has already arrived. Also, I love these little bud vases I got at CB2 last year – they were a total impulse buy, and truth be told I think one was supposed to be a gift, but when they arrived I decided they were a set and kept them both. Now if only it could be as springy outside as it is in my apartment!

I hope everyone has a wonderful weekend! I’m looking forward to laying low – maybe beginning some spring cleaning/closet organizing – and hopefully trying out some new recipes to share with you on Monday! TGIF!!